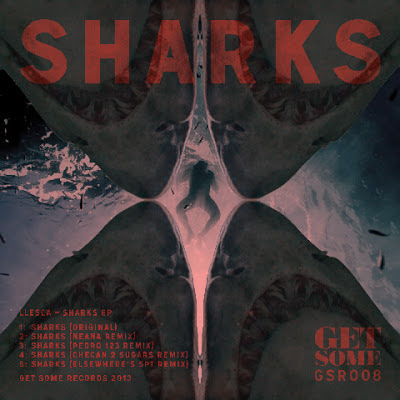 "The eighth release on Get Some Records, sees Lancaster teen Llesca make his debut with 'Sharks', set for release in June and accompanied by four unique remixes. The track itself is centered around a repeatedly chopped vocal stab, bouncing off-­pitched claps in a frenzied intro and with the drop comes a distinctive sci-­fi riff, heavily synthesised and given space in the mix for maximum impact. The elements combine and evolve throughout, shuffling above swollen bass notes in an up­ to ­date fusion of 140BPM grime and garage."

Get Some come up with another stellar release, this time from teenage newcomer Llesca and backed with a formidable amount of remixes.

'Shakes' is the sound of jump up Grime with snapping hand claps, vocal cuts that bring energy to the production and those large synth lines that are signature to the genre.

It begs to be played on a loud system.

As for the remixes, it's hard to pick a favourite with each giving the original a different spin. Pedro 123 manages to turn it into playful grime with huge stabs, Neana takes it more industrial, as does Elswhere who lays down heavy low-end kicks and Checan utlizes his signature baseline sounds to gear it towards the dance.

Released on 17th June by Get Some Records.