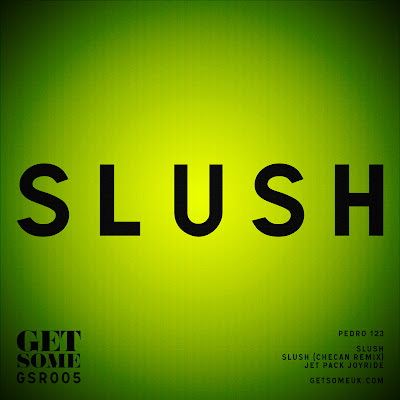 "In between running a taste-making music blog and club night of the same name the label arm of Get Some presents its fifth release, the Slush EP, from the precocious talent that is South-London's own Pedro 123.

It's no surprise then, that the 18-year-old has already received praise and multiple spins from Radio 1's Skream & Benga, Dirtybird's French Fries and Rinse FM's Roska, Brackles and Monki for his well-informed approach to his productions."

Pedro 123 has been making a bit of news recently and perfectly demonstrating his production potential with potent material.

The first example would be his remix of iO & Lakosa's 'Home Early', which stands up close to the original which it's grimey makeover. Then we got the first offering with his output on B.YRSLF Division with 'Oh' and then previews to a full release with the label in the form of the Swap Numbers EP.

Before that we have Pedro's 3-track 'Slush' EP released by Get Some.

Stand out cut is title track 'Slush'. A excellently executed piece of instrumental grime that has it's opening melodic tone looping around in my head. Love how it manages to channel a few older grime tunes, but sound quite fresh.

Special mention for Checan on the remix to 'Slush' also. Baseline and grime seem to effortlessly go hand in hand.

Released 12th November on Vinyl & Digital formats by Get Some Records.

Below I've embedded the rip from Roska' Rinse FM show of Pedro 123's 'Home Early Remix' VIP. Worth your attention...