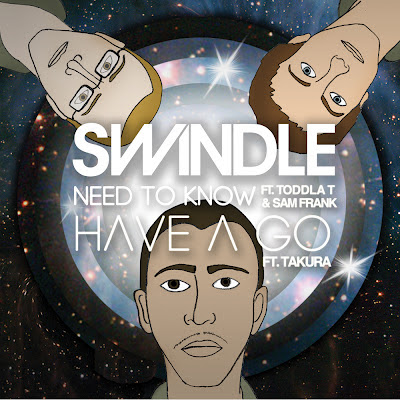 'Co-produced with Radio 1’s Toddla T, ‘Need To Know‘ slows down the pace with the help of Sam Frank’s vocoder-aided lyrics that echo that of Zapp and Roger with ultra funky synths and chord progression.

Frank croons effortlessly about the ‘the other woman’ and all of her positive attributes but protests that she still hasn’t got anything on the main woman in his life. With its seductive slow-mo bounce and love-fueled content don’t be surprised to hear this closing a few DJ sets in months to come for the last dance.'

Swindle's back with another fantastic release.

Little bit of a change of direction with 'Need to Know', where the funk is toned down and the smooth is excelled, making the most of Sam Frank's trademark vocoded vocals. There's such a much unique loved up swagger that oozes all over the track.

A great collaborative effort which also featuring the styles of Toddla T. I knew that something was in the works between Swindle and Sam Frank, but the addition of Toddla on production is a welcome surprise.

I'm also a sucker for animated video's and the visuals for 'Need To Know' compliment the track immensely.

'Need To Know' is released alongside a Takura featured 'Have A Go', which has already been on heavy rotation on radio. Speeding things up with heavy bouncing baselines, glowing pads and funky drum rhythms.

Brilliant all-together package from one of my favourite producers around, I'm going to blast this out and hope that it inspires the sun to shine.

A stream of 'Have A Go' taken from Annie Mac's radio show is below...

Out July 6th on Swindle Productions.