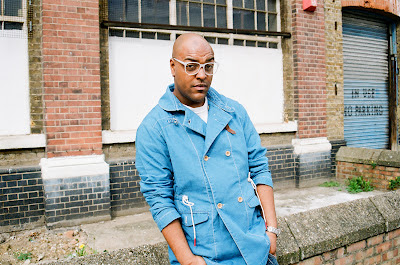 I put forward some questions to Donae'o asking him where is creative process and influences come from, his views on industry aspects such as free music, building fan bases and what he looks for when collaborating with other artists.
Donae'o is currently promoting his newly released single 'Big Ben'...
One of the UK’s most prolific and exciting vocalists Donae’o returns on April 22nd with his new single ‘Big Ben’. Following on from last year’s soulful ‘When Angels Sing’, Donae’o flips the script to demonstrate his versatility, delivering a bass heavy club anthem, the perfect vehicle for the MOBO nominated rapper/producer to show off his lyrical dexterity.

Having working with everyone from The Streets and Ms Dynamite to Shy FX, Breakage and B.Traits, Donae’o is the UK underground’s go to man when a serious injection of swagger is required. With his inimitable voice, production talent and drive, it won’t be long before the rest of the world discover the UK’s best kept secret.

Your new single ‘Big Ben’ is a banger and it’s not your first either. What’s your creative process like?
When it comes to making music, I make sure I personally like the records first. That’s the main thing for me. A record of mine has to make me feel like my favourite artists do to me; they need to give me the same feeling. Like when you have one of Jay Z’s banging tunes, my records have to give me the same excitement. I want to give the public value. Y’know a lot of effort and time goes into making my music and in my opinion, if you want someone to give you money, you have to add value to their life. If my music is not adding value to my life, then it can’t do it for you. I have to enjoy my music as much as I enjoy other artists’. If I can do that for myself, then 9 times out of 10, other people will like it.
Before you put out singles like this, who do you go to first for reactions and feedback?
I always play my stuff to my friends and family. I have a whole heap of records and then they’ll go through them and they’ll say, ‘you know what, that’s the best and you should release it’ or vice versa. It’s the same process every time, I play it to a few people and then I’ll put it out.
I’ve always been an admirer of your ability to create really catchy hooks, especially on one of my favourites of yours ‘I’m Fly’. Are there any techniques or secrets behind your song writing?
With my songwriting, there’s no secrets, it’s just a numbers game with me, and a vibe. I’ve trained my brain enough to know what to say when the music comes. I write a lot so I quickly know the best hook or best style and that’s what I’ll go with the most. It’s all a vibe to me to be honest, once I vibe to something, it usually comes.
Who would you say has been the biggest influence(s) on the music that you make?
The biggest influences for me are Jay Z artist-wise and then D’Angelo, both as an artist and a producer. They’re at the top of the pyramid then it’s people like Pharrell, Chad Hugo, Kayne, Dr Dre and then on a garage vibe, Artful Dodger and Dem 2.

Your last album, ‘Indigo Child’, was released as a free download through BandCamp. What was the thinking behind putting it out like that?
In regards to putting out my music for free, I wanted to do it with my first album but I was working in a team and I felt that I couldn’t do that as you have to respect the opinions of everyone around you. I wanted to start again with ‘Indigo Child.’ I wanted the public to have it to understand me and what I do before I can ask them to buy my music.
Is it easy letting that much material out for free? Some artists seem to be willing to do so, others uneasy and a few are completely against it.
I make money through other ventures so when it comes to music it’s not a bother for me as I’ve not really made my money through selling records. My next album is the first one I’ll be promoting to really a sell a record and do my thing. I’m gonna be putting music and albums out for years until I die so one or two albums for free is a small percentage compared to my musical life span. Plus, it’s always good to test the market.
I really like the recent spate of covers that you’ve put out lately, putting your own original take on tracks and it’s a really creative way to build a buzz. Do you have any advice for artists out there trying to make themselves stand out from the crowd?
To stand out you have to be yourself, but you have to have enough material out there for the public to have an idea of who you are. You cant expect someone to understand you if you put out one track and one style of music. A lot or people only associate me with Funky but with the covers, they’re getting to hear tunes they know and like but hear me putting my own spin to it. The response has been excellent and now, because I’ve done loads, people are accepting me differently. You have to have patience, you can’t expect people to understand you with your first tune, you can’t expect them to know who you are and what you do. You need to put out as much music as possible in a year or two years, don’t think about selling records or going number to number one – you just need to put out the best music you can and build a connection with your fans.

I’ve noticed that you’re extremely active on social networks. How have you found trying to promote your music through those channels, especially when it wasn’t a promenade tool when you first started to come through?
I find it helps but I’ve also learnt you have to really build your fanbase there for it to work. You have to have hundreds of thousands of numbers and fans on those channels. I’m using these tools to build up the other tools y’know. I’ve always used marketing methods that are more direct to the public, like emailing fans and emailing DJs. But I’m building up Twitter, hopefully at the end of the year, I’ll be on 40, 000 followers.
I’m pretty sure you’ve near enough played shows in every place there is inside the UK as well. How important has playing shows and clubs been to getting your music out to newer audiences?
It is very important for me to get music out there by performing. If it wasn’t for the clubs and UK underground scene, I wouldn’t be where I am. To promote your music, you have to perform it, you have to perform live for people to understand it, touch it, get a feeling for what it is. When you hear music loud, you hear it differently.
You’ve worked with a lot of different artists in the past and continue to do so, I really liked the track that came out with Maverick Sabre and more recently the Big Ben remix. How do these tend to come about and what do you look for in a collaborator?
Sometimes with collaborations, I’ll contact them, or sometimes they’ll contact me. But I look for one thing; I have to like what you’re doing. Do you inspire me, do I enjoy your music? If those things make sense to me then I’ll work with you, then it’s fun, its added value to me. I’ve enjoyed myself and that’s all I really care about.

Any there any collaborations currently in the works, planned or that you’d like to make happen?
Collaborations planned at the moment, I cannot tell you about! Ones I’d like to make happen, I’d like to work with Drake or maybe Lil wayne or Nicki Minaj!
Finally, what’s next for Donae’o?
I’ve got my next album coming up called ‘Underground King’ which will probably be out towards the end of Summer, so keep a look out for that!
Donaeo's 'Big Ben' is available on iTunes now with remixes from Artful, Preditah, King of Drums, Sarkodie and includes the instrumental and acapella.