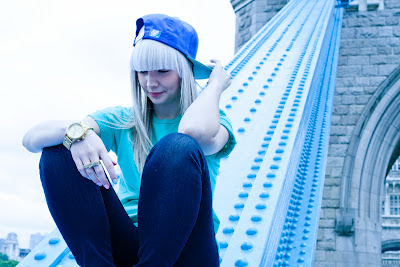 I was kindly invited to send over some questions to the multi-talented B.Traits, in anticipation for her forthcoming single 'Fever'. Since then B.Traits has been announced as one of four new DJs to take over on Radio 1's 'In New DJs We Trust' slot, along with Mosca and Julio Bashmore.

Through the Q&A session, B.Traits discussed how Elizabeth Troy came to feature on Fever, working with Shy FX, differences between Canadian and UK crowds, plus we ask her to recommend us some music.

Her debut single ‘Fever’ makes no apologies for what it is, a sure fire party starter that tips its snapback cap to those classic rave and garage anthems of the past whilst still sounding utterly fresh for 2012."

*Click the play button at the bottom right to listen to all the embedded tracks whilst you read.


DPM: I'm in love with your new single 'Fever', which features Elizabeth Troy on the vocal. Was the track specifically intended for her?

B.Traits: Thanks! Not really to be perfectly honest. It had been a instrumental for quite some time. It took ages to find the perfect vocal for it.

Elisabeth had been on my list of vocalists to work with. My label boss Shy has known Elisabeth since way back and was able to schedule a session for me. After that session I knew I had found the perfect vocal and that's when it became Fever!

It's being released by Shy FX's Digital Soundboy label. How exactly did that link up happen?

I met Shy when we were both playing at a NYE gig in Germany back in 2006/07. Later that year we were both a part of the World of Drum & Bass tour and spent many long hours on the tour bus listening to beats and talking about production. Once I returned home, I ended up sending him a few demos over AIM. We continued to speak regularly about music, our passion for different genres, good dance music in general and we discussed where I wanted to go as an artist and my plans for the future. And a few weeks later he asked me to join DSB.

Shy is a pretty rad boss. He makes time for every artist on the label, especially in the development process. He’s a great mentor, he’s literally been through everything in this music industry and has such a clear vision for what Digital Soundboy is as a label.


You’re an established DJ and a lot was made of the DJ Mag top 100 not having a single female included. What are your thought regarding that and is that something that you'd maybe like to crack?

To be honest, I’ve never discovered a DJ (male or female) via any DJ list, so to me it doesn’t really hold too much status. I do think it’s rather silly that women were completely overlooked for the top 100 and it makes me wonder who is behind these lists.

The important thing is to concentrate on your music and working hard and if you get recognition from these so-called lists then great, but I won’t be fixating on them!

You were part of the Digital Soundboy pod at the London Eye for the Red Bull Revolutions event last year. That must have been a pretty surreal experience?

The Red Bull x London Eye event was so insane! So rad to be a part of that moment in history. Who knows if they will ever be able to do something like that again. It was such a memorable experience.

Nearly everyone in UK dance music was there! One place, one hub for the world to watch/listen. It was a once in a life time opportunity for all of us!

I'm sure that you were able to take plenty of pictures, right?

Yep! We brought our lovely photographer Sarah Ginn with us.

With all that being said, would the London Eye be the most unique place that you've ever played?

I've seen plenty of pictures, predominately from your Instagram account, of you playing in multiple countries, let alone clubs. Where have you not played that you'd love to?

Oh man, there are soo many places I have yet to travel to.

My list is: (in to specific order...)
Australia,
New Zealand,
Berlin,
Japan,
New York,
South Africa,
Jamaica,
and on and on...

Of the ones that you have played in, which do you really look forward to playing at?

I’ll be doing my Asia tour again this year and I always look forward to that circuit. I'm also represented by William Morris Agency now, so I’m very interested in seeing all of the cool places I'll get to travel to in the coming months.


Your initially from Canada. Has that meant you've had to relocate to the UK?

I didn't have to relocate to England, but music is my career now and since I'm a member of Digital Soundboy, I really want to work and grow with the team, as a team. I miss Canada at times, but I absolutely LOVE London.

Are there many differences in the crowds between the two countries?

Huge differences! In general, you could say dance music isn’t as big in Canada as it is here in the UK. Canada is more into pop and hip hop. The UK has a substantial lead in the practice of electronic music so it's no surprise, although there are parts of Canada such as Toronto that really has made a name for itself.

I’ve played some amazing shows in Canada, but the reactions in the UK are unreal. The punters here are up for anything! And they are often very educated in underground bass music. They crave to hear new music and they want to experience new sounds, rather than just hear bangers and anthems all night.

If you were able to take one thing from Canada & bring it here, what would it be? and vice versa?

From Canada, I would bring the food... especially the sushi. From the UK, I would like to bring the entire music scene to Canada!!


I've got three little quick questions for you... What's currently playing on your iPod?

What album are you most looking forward to this year?

Shy’s got a few projects I’m quite looking forward to... but I’m being biased.

Can you recommend an artist for me to check out?

There is a girl named Grimes, she’s also from Canada. Really cool voice and a very psychedelic style of music. I’d actually like to get in the studio with her one day!

Finally, what does the rest of 2012 have in store for B.Traits?

Lots of new music! I’ve been locked in the studio for the past year writing loads of material. I’m excited for everyone to hear! I don’t like to give away too much though! I like to surprise people as well as myself.

I also plan to do many more gigs this year and to travel to more amazing places. I live for performing and networking with like-minded/creative people.