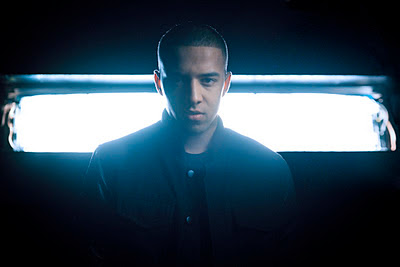 Youngman has been generating a lot of attention recently with his forthcoming single 'Who Knows?', with features coming in the Guardian's 'New Band of the Day' column and being listed in the Daily Mirror's one to watch list for 2012.

I managed to get a few questions across to Youngman, where I asked about how 'Who Knows?' came to be, what it's like to be signed to Shy FX's label and recent artist comparisims made in the press.


DPM: Skream produced Who Knows, how did the track come about? Did he send you the beat or did you work together in the studio?

Youngman: We didn’t actually get in the studio together as such. The story behind the record was we were at Rinse FM, eating Nandos, it was 40 degrees in the height of summer and the air con was broken and he played this record, and Benga and I looked at each other, and I said on air, ‘Skream, I’ll vocal this track and I’ll bring it back next week and play it for you guys.’ I wrote it the next day, sent it over to him, he loved it and it’s kind of gone from there.

DPM: Im aware the video for Who Knows will be dropping soon, what can we expect to see?

Youngman: Me in the middle of a west London park having a lovely time - with a few special effects.


DPM: I see from your twitter, etc that your doing shows all the time & in so many different places. How do you actually find time to get in the studio?

Youngman: I write most of my songs in the car and I have a studio at home. Whenever I get back from shows, or have a spare moment, that’s where I am.

DPM: Out of interest, how many flights have you been on in the last month?

Youngman: This month, I’ve been a big flier. I’ve been averaging about 2 return flights a week this month, last week Benga and I were in Madrid and Barcelona, this week we’re in Switzerland and Germany, and next week we’re in Denmark.


DPM: Your signed to Shy FX's Digital Soundboy, how did the link up happen?

Youngman: The thing I love about Digital Soundboy is they really understand me and my music. It was always a dream to work with Shy FX and I used to see him on a regular basis on the clubbing scene and the D&B circuit and I’d say to him, ‘I’d love to get in the studio with you, I sing’. It turns out, he loved a track I did with Benga but he didn’t know it was me for a year, and all the while I was talking to him, saying how interested in working with him I was, and it wasn’t until I gave him a demo and he put 2 and 2 together, he called me and said ‘I didn’t know that was you’ and signed me on the phone.

DPM: What's it like to be with a label with so many talented artists/producers?

Youngman: It’s emotional! I do have to pinch myself sometimes when I think about the great artists I’m working alongside.

DPM: You were mentioned in the guardian last week. They compared you to a few artists & I was wondering which you preferred, a 'male Katy B' or a 'modern day Craig David'?

Youngman: They’re mad flattering, I’m a big fan of both of them. I’m not counting my chickens too soon though, I’m just going to keep my head down, make music and see where it takes me.


DPM: How does it feel that someone like the guardian are picking up on what your doing?

Youngman: It’s a little bit surreal to go from such a raw clubbing audience to be recognized by mainstream publications. But I’m thankful for all the support I get from everyone.

DPM: What can we expect for your releases in 2012? I've read a few names on who your working with, any you can confirm?

Youngman: Obviously Benga and Skream. My album is being executive produced by Benga and Shy FX and includes records from Skream, MJ Cole & Sam Frank, Breakage to name a few.

DPM: If there was one thing that you'd like to achieve in 2012, what would it be?

Youngman: I’d like to establish myself as a solo artist, release my album and do plenty of shows.


'Who Knows? is released by Digital Soundboy on 29th January.